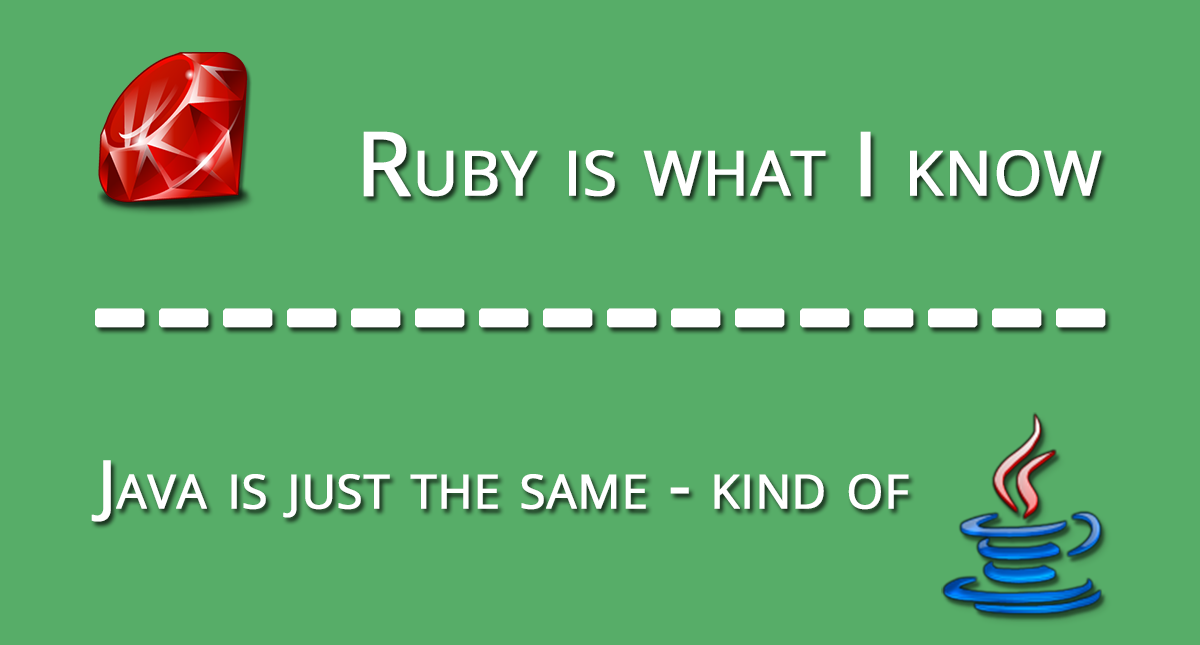 Just how similar are these two languages? I’d say it depends if we are talking about syntax or “foundational principles…”

After completing the intense three month Ruby on Rails course at the Iron Yard I didn’t think I would ever want to learn a new language. I mean, I knew for a fact that those where the three hardest months of my educational experience… and I didn’t want to have to go through that immediately again.

As I’ve been applying for jobs I realized a number of times that there are a lot of junior/entry level jobs out there that don’t necessarily ask for or need Ruby on Rails. That wasn’t enough to get me to start learning to code with Java, but an opportunity with a local company was.

So for the past few days I’ve been working towards the idea of learning to code with Java. The hardest thing for me was to mentally ask myself to do it. Learning Ruby was hard… I wasn’t sure if I was ready to tackle something that size again.

The second thing that was difficult to over come was “where to start.” A few searches led me to Udemy and some introductory Java courses. As with Ruby and Rails having everything installed correctly before you try to code is an important step. After waiting for things to download and then installing packages, I was ready to start.

After a few tutorials and lessons I suddenly realized something. At the end of the day all programing languages (at least the ones that I’ve been exposed to) have a lot of similarities. Sure, there are lots of differences in syntax but the majority of the over arching ideas are similar.

I’ve not written anything amazing yet using Java, but realizing that what I know about Ruby and Rails will give me a good head start as I continue to learn was a real boost to my “learning to code immune system.”

Now I can’t help but think about all the other things that I’d like to learn eventually. Swift for IOS and OSX development. PHP for better WordPress development. Node.js for all kinds of cool things…

We’ll see when and if I have time for those things, but I did realize again that I can learn new things if I’m willing to stick my nose to the grind stone and work at it.