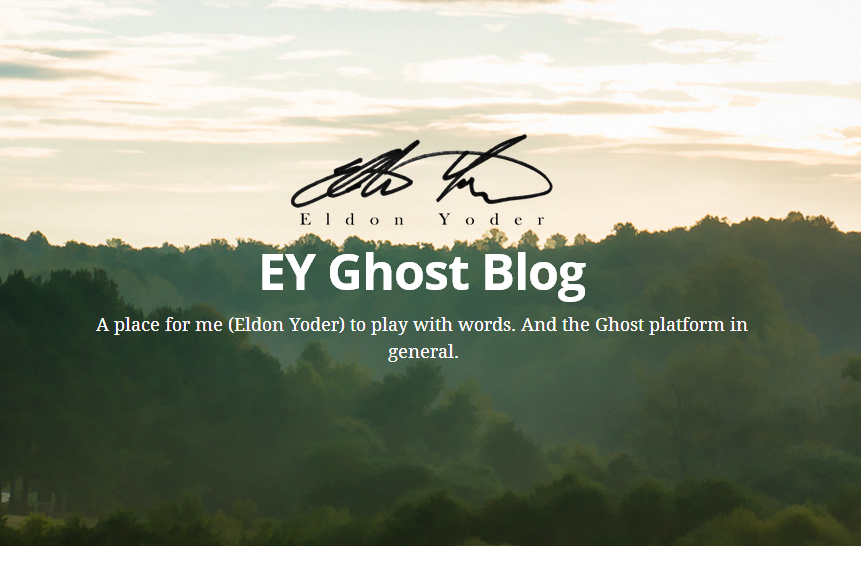 Truth is I’ve waited for this day for… about a week. I can now play with the Ghost blogging platform.

Since I heard about it a few months ago, I’ve been intrigued by the idea of the Ghost blogging platform. So I thought I would try it out and see how it works.

Will I be switching to ghost for my blog anytime soon? Nope. I’m actually pretty happy with WordPress. WordPress has served me well in the past and for what I need, tends to fit my purposes better.

What exactly do I mean by that? Simple. The blogs I tend to work with are integrated in websites. As in I have a website for myself or a client that also has a blog as part of the overall website.

I guess I could work around this with a sub domain that would point to a Ghost blog, but for now the way I am used to working in WordPress is simply better suited to what I need.

I like what I’ve seen of Ghost so far.

It’s also quite minimalistic and pretty. By pretty I mean it is simple and clean. Not a lot of clutter that pulls your eyes away from content.

This applies to both the back-end where posts are created and edited, as well as the front end where you can read content that simply begs to be read.

It Reminds me of Tumblr

Now before I say too much along these lines. I would say that I don’t use Tubmlr. I have played with it in the past as well, but never felt at home.

So how is like Tumblr? Ghost is simple, clean and all about the content. Sharing is easy as well.

In a lot of ways Ghost would remind me of a self hosted version of Tumblr.

I know it isn’t tied to Tumblr. But I can’t help but believe that a lot of the design ideas of Tumblr have been implemented here as well.

Why You Should Care About Ghost

Now I know a lot of folks will dismiss Ghost for various reasons. It’s mission all along has been to create a blogging platform. That is all.

They have done that pretty well.

Some people believe that the folks who created Ghost are trying to cut into the market that is currently being dominated by WordPress. The fact that this could be true is a bit of a wake up call for WordPress (at least in my opinion). The fact is WordPress does seem quite complicated when a user comes to it for the first time. While that may not register in the minds of savvy, seasoned users. It definitely makes a difference for someone who is just trying to get into blogging.

Am I saying WordPress is difficult? No. But it is quite a bit more complicated than simply blogging using Ghost. (Once you get it set up.)

What Should The WordPress Response Be?

Truth is. I don’t think WordPress should change the way they are doing things in the least. Maybe they could use a bit of a kick in the pants when it comes to innovation and making a better product. But that could be said for most tech companies.

Does WordPress need a better UI? To some extent. I have been using the MP6 plugin which gives WordPress users access to the features of upcoming WordPress dashboards. I like it a lot. It is a big step forward in my opinion from what they are using right now. Is it perfect? Nope. But then Ghost isn’t either. (The first thing it needs is a good spell checker!) (Saving settings works when you do it in the right sequence.)

Also of interest to me is the idea that Ghost is build using JavaScript. I have dabbled with a number of languages in my illustrious (not) career of hacking code.

But from what I understand about JavaScript, it will allow Ghost to be developed by designers, regular UI and UX folks who know JavaScript. I think that is cool.

The other reason I like the fact that Ghost is using Java is that it is likely one of the first languages that I will learn in my “post college” career. We will see… For now I’m focusing on getting through a few more weeks of our Fall Festival season here on the farm.

Love it or Hate it

So there you go. Love it or hate it Ghost is here. It might be the answer to a need that you have. Or it might raise some questions that till now you hadn’t thought about.

Will Ghost last? I think it has a fair shot. But only time will tell the whole story.

I’d say give it a whirl – the worst you can do is try it and not like it!