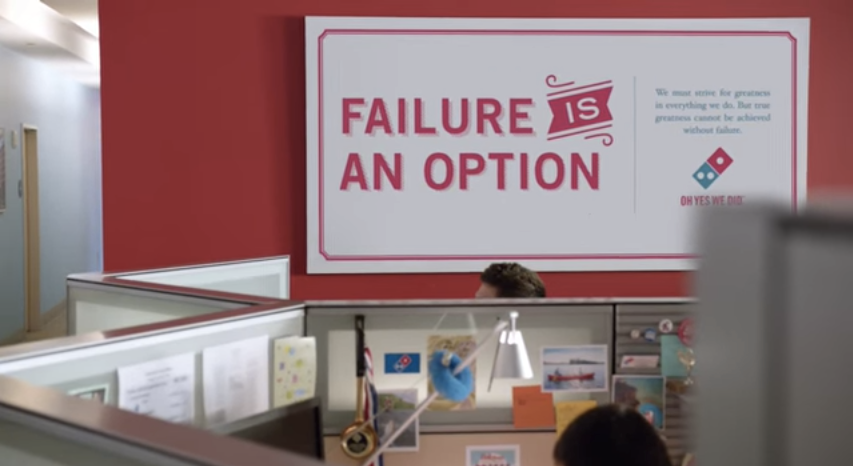 Failure is an option…

I’ve seen an advertisement several times in the last week or so. It always kind of catches me off guard… but I think the philosophy behind it is rather interesting.

Let me tell you a bit about the ad.

The ad is for Dominos Pizza. The first part of it says…

“at Dominos, failure is an option. We know that not everything is going to work. In order to move ahead, you’re going to make mistakes.”

Then they talk about the failure of the cookie pizza and eventually their new and improved pizza.

I don’t really care about the cookie pizza, but I think the concept of failure is interesting and quite possibly very important.

As I write more code and create more apps I realize that there are a lot of correlations between life and code and apparently ads. Not that we can ever get life “figured out” and “bug free” but rather that building an app is a lot like life. (and apparently like creating new things in the Pizza world.)

Failure is an Option

Maybe it’s just me, but I hate failing. It usually makes me feel miserable and, well, like a failure.

Oftentimes the pain involved with these failures varies quite a bit. Usually it varies based on what I was originally trying to do. If that thing involved other people the failure is exponentially more difficult to deal with than if I fail by writing fifty lines of code that should work but don’t.

The barrier to entry on a lot of different things is whether or not we are willing to fail. There are other things that can (and should) hold us back from trying some things. But if the only thing keeping you (and me) from doing something new, different or that is really intriguing is fear of failure. By all means, get over it.

I am pretty sure that if you and I were to sit down together for a cup of vitamin juice at 102 years old… we would agree that we should have not held back so much in the things that we tried in life.

Failure is an option, but so is success. Accept both possibilities in most anything that you come up against. I’ll buy the vitamin juice when we get together in a few years.

So far we have figured out that failure really is an option. Now let’s talk about how often we should be failing.

I am of the opinion that if we never fail it usually points to never trying new things or never trying to learn something new.

If we can get over the hurdle of not being willing to fail because we hate failing… The next logical step is to fail at everything. Ok, maybe not everything.

There are extremes on both ends. I tend to be the careful type, not doing anything till I am sure I can do it. The other end of the spectrum is equally dangerous. I would advocate falling somewhere in between these two extremes.

But seriously look at the things that are holding you back and then ask yourself if you have a shot at breaking through whatever wall that is. If you believe you have a shot at it, understand that you could fail, but then back up and get a bunch of force built up as you crash head first into that wall.

The errors that show up when I write code that is almost correct are often more enlightening than if I don’t get that error message and my code “just works.”

Failure is an option. Be willing to fail often.

Now, perhaps this is the most important part of this entire blog post.

Failure can only be helpful if we are failing in the right direction.

Part of this comes down to knowing which direction you want to be going to begin with. If you don’t know where you are going it is extremely difficult to get there.

However as long as I continue to fail forward, into those walls that are between me and where I am going. I will (most likely 🙂 ) break through each wall eventually. When I do, I will have one wall fewer to break through in my quest of becoming good at what I do.

Fail in the right direction. Knowing where you are going and what is between you and your destination is half of the battle.

I feel like I should throw a disclaimer in here. I am not trying to say that we should fail for the sake of failing. By all means if you are trying to overcome a habit or some other personal struggle, failure in that area will set you back. I am definitely not advocating that kind of failure. I would acknowledge that failure will probably happen, but it doesn’t mean you will never accomplish your eventual goal.

In failing we often learn what it takes not to fail. If we can pull ourselves together and make another attempt at “taking the hill,” eventually we just might figure it out and stand victorious at the top.

If we stopped trying every time we failed. We would never come up with anything, we wouldn’t accomplish much and life would be extremely boring.

By the way. Here is the original ad if you’d like to see it.